The acoustic approach to bat research is a new science : a mere 30 years ago no one could claim to identify bat species on the basis of their sonar signals alone. Better ultrasound detectors , and patient research in France, have brought it to a level which has opened up new unsuspected opportunities. The method is based on two innovative approaches :

This way of proceeding has several advantages : the observation of bats flying in many different situations clearly shows the considerable intraspecific variability of echolocation signals ; the species identification process takes into account behavioural criteria (deducted from signal rhythm over a complete sequence) ; on-the-spot identifications are highly reliable in more than 80 % of the sound sequences collected in the field. This, and the fact that the observer plays an active role and sees his or her experience valued in return, explain the growing popularity of the method in Europe over the last decade. At first the project focused on the following question : how can an observer in the field, equipped with a bat detector, be sure to identify the bats present in the vicinity ? The publication of « Ballade dans l’inaudible » The Inaudible World (Barataud, 1996) was an answer to this question, the decision to include only criteria based on auditory appreciations had been carefully thought out beforehand. It was at this stage that some of the criteria still essential today, and central to this naturalist's approach were identified : This approach, referred to as the 'acoustic ecology method', characteristically takes into account both the bat's behaviour as reflected in the rhythm of its emissions, and the energy peaks of its signals (audible in time expansion but often undetectable in computer-generated graphical outputs). This stage also optimized the heterodyne technique, and gave particular importance to the observer's capabilities in terms of assessment and interpretation : The observer, endowed with knowledge and experience, becomes much more than a mere computer operator. With the publication of the ensuing booklet + its accompanying CDs (Barataud, 2002), to update The Inaudible World, the auditory method could not be taken any further, It was time to pursue the quest by turning to analysis of the digitized sound files using computer software.

This new book presents a very complete overview of these original findings. An introduction (by Yves Tupinier) explains the physics on which the biological sonar is based and the principles of the technological appliances that convert ultrasounds into frequencies audible to the human ear. The identification criteria of 34 European bat species are given in detail, The book goes on to describe how to study the bats' foraging habitats with a bat detector, using a naturalist's approach, that makes possible ecological diagnoses of the different habitats ; a usefull tool for landscape management. The book also explains, with supporting examples, how the acoustic behaviour of a bat can shed light on its flight environment, its activity, and even its prey. An accompanying DVD illustrates the text, with over 300 sound sequences collected from formally identified individuals flying in natural conditions. The handbook thus contains a wealth of yet unpublished information indispensable to amateur naturalists and professionals involved in the management of protected areas or in environmental impact studies. 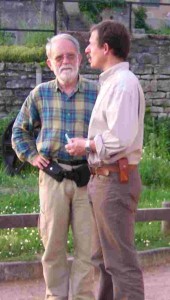 The book « Acoustic ecology of European bats » was written in collaboration with Yves Tupinier, a bat sonar specialist. Michel et Yves worked together between 1990 and 2018 with a great complicity.